What Colleges Could Do About College Admission, Part 2

In Part 1 and in other posts on this site, I’ve defined what I think a “better” college admission process is and emphasized that colleges and universities have the responsibility of reforming it. Only these institutions are  capable of making it more humane and responsive to social and educational realities current students face. Only these institutions can temper the zero-sum virus that infects students and families through the media and their own efforts. Only they can mitigate the damage to students the process does, ironically, in the name of getting a better education.

The college admission process has helped make high school a relentless slog for ambitious privileged students and a dismal morass of confusion for the ambitious non-privileged. Many non-privileged students may never even realize they could have had the opportunity to go to college at all. Without a concerted, cooperative effort among colleges and universities, the situation will only get worse. Congress is considering legislation requiring colleges to expand access to higher education, a sure sign that these institutions must act before they are forced to do so.

With these ideas in mind, I continue my list of suggested reforms that could make the college admission process a path of genuine access to post-secondary education for all students instead of an empty slogan.

I have no illusions that these recommendations would be easy to implement or even be considered. A constellation of other factors surrounds each one, making it difficult to take any steps that upset the apple cart.

In the case of the first item on this list, a commitment to accept students on a broader basis than one built primarily on GPA and test scores would require a great deal of thinking, planning, and recalibrating, especially at very highly selective colleges. But this would be well in line with recommendations advocated by Harvard’s “Turning the Tide” report, the difference being that the report puts the burden on students, while I’m putting the burden on colleges and universities.

Although we seldom acknowledge it, college admission is an entirely arbitrary process. Its forms and functions have become ingrained through time and custom, not law or inevitability. It has been built on continuous practice and refinement over the years, mostly to good effect, although its history is not without periods of exclusion and prejudice.  Admission offices carry out the policies of their institutions, not vice versa, so any changes would require wide-ranging discussions with trustees, presidents, development and alumni offices, and so on. But even to consider these changes provides an opportunity to have those conversations. 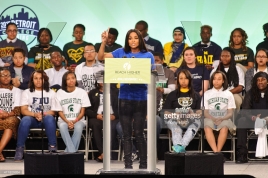 With a growing concern for enabling non-privileged but capable students to have access to a college education, it is more and more important for post-secondary institutions to consider doing things differently. Much of the discussion has focused on what these students can and should do to get into college; more attention should be turned to how institutions can act to achieve these socially and culturally valuable goals. Only their concerted efforts will really effect the changes even they profess to support.

I welcome your comments. The third entry in this series will contain my final initial suggestions. Look for it next week. Also visit my Forbes.com blog for more general advice and observations about the college process.

I am currently writing a book about college admission. I'm interested in the intersection of the college process and American culture. I attended Amherst College in the 1970s, taught high school English and theater at The Hill School in the '80s, returned to Amherst in the '90s as an admission dean, and began the '00s as a college counselor at the University of Chicago Laboratory School. I then joined Chicago Scholars as Program Director. Currently, I blog about college admission for Forbes.com. I also help community organizations serving low income students understand the college admission process so more students can consider gaining access to higher education. I have a few private college counseling clients that I take by referral only. The views expressed in this blog are mine alone.
View all posts by Will Dix →
This entry was posted in admission practices, college admission, higher education and tagged college, college admission process. Bookmark the permalink.

2 Responses to What Colleges Could Do About College Admission, Part 2